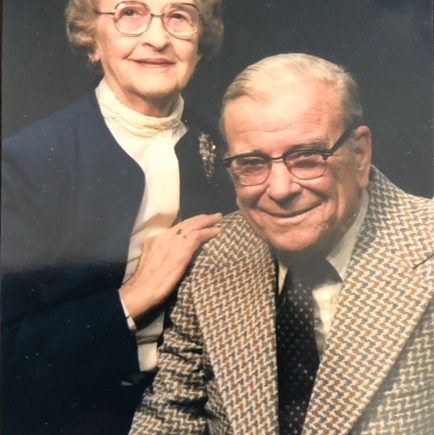 Paul and Alice were dedicated to preserving nature and nurturing a love of the outdoors in others.

Growing up around Paul and Alice Olson was a gift.  Although Paul received many accolades, Alice did so much to make his accomplishments possible. In addition to being a great wife, mother, and supporter of everything Paul did, she had a remarkable wit and wisdom that all who knew her loved and marveled at.  She was a nurse by trade, and provided comfort to all those around her.

The Art of the Possible

Paul embodied many admirable qualities, but chief among them was his optimism, which he characterized as the art of the possible.  For Paul this simply meant if you believed it was possible, you could accomplish it.

In his life, he believed that much was possible and that education and effort and having good people around you were at the base of it.

Paul was crippled by polio at the age of four. He had a withered leg and walked with either a brace or crutches for the rest of his life. He joked that when, as a child, he tried to play football with school mates, they would circle and always tackle him from the side without the brace for two reasons – one was that they didn’t want to be hurt by tackling a metal brace and second that the brace would get bent up during the play angering Paul’s parents. But despite his apparent limitations, Paul embraced the challenge and took to the fields to play tackle football with the metal brace on his leg.

Paul always said that polio caused him to be a much different person.  Books became his friend and he never stopped learning. He also had a drive to succeed which may have been a result.

He taught general science at West and ran a number of extracurricular activities for students – including a national champion archery team. He also headed up a community organization that provided playground and summer activities for children in the then town of Madison.

When Midvale School was to open, Paul was asked to be its first principal. In an article to the communities that were to be served by Midvale, he wrote the quote that now appears on the walls of the Olson school. That quote talks about the vision that a school should be the palace of childhood where the sound of happy laughter of children should be the most prized possession of the school. Nothing could be better vision for a school. That is particularly so as we reflect on recent times.

Paul was able to recruit and serve with a remarkable group of teachers who made Midvale exactly that kind of a palace. Midvale consistently ranked among the top elementary schools in the city of Madison during Dad’s tenure. That’s what the art of the possible is about.

Dedication to the Environment

About the same time, Aldo Leopold wrote his famous Sand County Almanac. This became Paul‘s Bible for his activities in the environment. Once again, the art of the possible became his clarion call. Whether it was reclaiming the Black Earth Creek and converting what was a muddy mess into what is in now a class one trout stream, starting an organization to preserve land so that prairie chickens would survive in Wisconsin, beginning a nationally awarded program for outdoor education among junior high aged boys, working to create the Madison School Forest, adult environmental education at Midvale school in the evenings, serving as the first president of the Wisconsin chapter of the Nature Conservancy for 18 years, serving as an appointee of then Governor Gaylord Nelson on the Wisconsin Conservation Commission now the DNR board. There are now 2 properties owned by the DNR named for Dad – and he is in the Wisconsin Conservation Hall of Fame along with other noted Wisconsin environmentalists like John Muir, Aldo Leopold and Gaylord Nelson.

Throughout all of this, his theme of the art of the possible was present. Whether saving a trout stream, starting the summer outdoor education program for junior high boys, preserving the prairie chicken, saving thousands of acres of scientifically important land or serving the state of Wisconsin with important environmental efforts, he always had faith that it was possible to make things better. The keys were optimism, a plan, working with others and an abiding faith that it was possible.
The Paul & Alice Memorial Fund was created with the same sense of optimism, and dedicated to promoting environmental conservation and education.