“When you really want something, and believe in it, you’ll get it.  There’s a way.  You can win, by God; you can win.  Those chickens were something superb.”

Called the last of the “free spirits,” prairie chickens cannot be tamed, and must live in the wide open grasslands. Prairie Chickens once flourished, with a population estimated to be in the tens of millions.  However, with competing interests for land for farming and housing, by the mid-60’s the prairie population dwindled to roughly 400,000 and was threatened with extinction.  In order to survive, prairie chickens need permanent sod for nesting and rearing of their young.  In the winters, the chickens need the protection of undisturbed grasslands, and in the summer, they rely on insects on the grasses for survival.

Paul had seen the beauty of the prairie chicken and was dedicated to ensuring the species’ continued existence.  In particular, he was thrilled by the mating dance  – “the booming”- of the prairie chickens, which drew spectators from around the state to the grasslands of Portage county’s Buena Vista marsh.

“Well, back in the fifties, I went up and saw the prairie chickens-the real thing.  I came back excited.  I thought, ‘Here is something so dramatic, so wonderful, that I can’t permit it to disappear.’ The Dane County Conservation League had always been a sucker for me, so together we got the chicken project started.…I have a feeling, almost like religion, about the way that project developed.  When you really want something, and believe in it, you’ll get it.  There’s a way.  You can win, by God; you can win.  Those chickens were something superb.”

Understanding the critical need for grassland, Paul convinced the Dane County Conservation league that the bird must be saved.  They formed a committee and created the Prairie Chicken Foundation.  From 1958 on, working in conjunction with the DCCL, Paul purchased 6,000 acres of prairie-chicken range.  Beginning in 1960, he also worked with a Milwaukee-based conservation group to purchase another 6,000 acres.

In year, the area was name the Paul J. Olson Wildlife Area.  Today,  the Paul J. Olson Wild-life Area provides a stable habitat to between 150 and 200 prairie chickens, and draws visitors around the state year-round, especially during the annual Prairie Chicken Festival when boom time is in full swing. 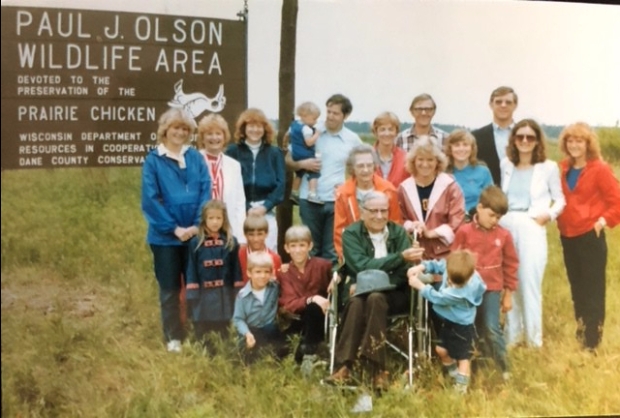